Want to creat a professional website FREE OF CHARGE?

Hide / Get this widget


The basic staple food is rice, white, and red rice, though white rice is more common. There are a great variety of vegetables, and I had eaten spinach,cabbage, cauliflower, brocolli, eggplant, and etc. Potatoes are in abundant, so I have potatoes in almost every meal. Together with the rice, we have five to six dishes of vegetables , and some dried meat. Do note that the Bhutanese do not slaughter the animals for the meat, so most of the meat that the tourists get to eat are actually imported from India. 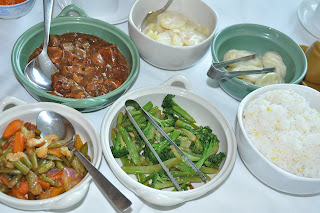 Basically, the Bhutanese love chili. Yes, they add chili and salt, and sometimes saffron or curry spices. Generally, their food is greatly influenced by Tibetan and Indian food. However, as a tourist, you normally eat at the restaurant which serves the tourists. I came to understand there are restaurants or rather eateries, which are only meant for the locals. After all, the food the Bhutanese eat is much more spicy, and due to cleanliness issue, your local guide will never bring you to eat at the local eatery. The reason for me to ask the guide to bring us to such eatery is to actually try the authentic Bhutanese food. You would probably know that food that is prepared for the tourists is always not so authentic, as they try to cater to the taste bud of the others. In this case, they use less chili, especially a lot of the foreign visitors are from the Western countries - USA, and Europe, and most of them would not be able to take spicy food. However, for those Asians who love chilis, there is no issue, and probably you might like the ema datshi (chili cheese, national dish) especially if you love the cheese. 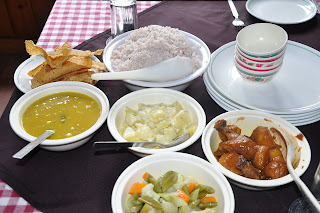 In Bumthang, I had tried the buckwheat pancake, and it was quite nice. 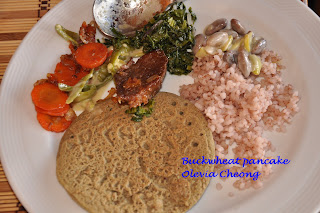 The national dish is ema datshi, which means chili cheese.
It is quite common to see bright red chilies (small peppers) drying on the roof and strips of yak meat of beef hanging out to dry in the sun.

And you must try their yak butter tea. Very heavily salted, and very concentrated taste of the butter. Butter tea - sudja. And you can often find the Indian style milk tea - ngad-ja

If you love beer, try the Red Panda, which is locally brewed in the Bumthang area. And perhaps the Black Mountain Whiskey which is often called the BMW.
Posted by Unknown at 9:09 AM