Want to creat a professional website FREE OF CHARGE?

ZHEMGANG
- off the beaten track 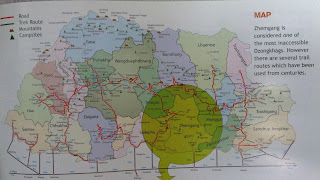 
The sacred realm of three hills


Zhemgang Dzongkhag derives its name from a 12th century monastery built by Lam Zhang dorji Dragpa, a scholar-sage of Drukpa Kagyud School. The Dechen Yantse dzong, built in 1980, stands on the site where Lam Zhang built a monastery in 12th century. The monastery was named “Zhangang” or immeasurable mound.


Bhutan often revered as the ‘Land of the Peaceful Dragon’ is also regarded as one of the ‘Last Shangrila’ in the Himalayan region because of its remoteness, its spectacular mountain terrain, varied flora and fauna and its unique Buddhist monasteries. It is in the relatively unexplored pockets of Asia, and protects its fragile environment and culture.


Zhemgang is an unparalled biological and culture treasure in the Kingdom. Since it consists of three hills, it is also known as Kheng Rig Nam Sum or the sacred realm of the three hills.


The people here are mostly khengpas, and agriculture is their main source of income. They respect nature and mainly practice the bon religion. Over 20 festivals are observed in a year. They have unique customs, and are friendly. There are over 80 religious and cultural sites in Zhemgang.


Most of this Dzongkhag is under protected forest cover and home to several globally endangered species of flora and fauna. Dangkhar, a special traditional tourism village is a flagship of the district’s community based eco-tourism project.


In 1963 when Zhemgang was created a separate dzongkhag, the Zhemgang dzong was renovated under the command of His late Majesty, King Jigme Dorji Wangchuck and renamed as Dechen Yangtse or Druk Dechen Yangtse dzong. This large unexplored district offers Historical, Nature, Birding, Rafting, and Trekking Tours as well as Boat and Elephant Rides in the world’s most protected forests.


A DISTRICT OF NATURAL DISCOVERIES
Zhemgang has large areas  of natural ecosystems with richest tempera nature reserve in the entire Himalayas. The protected natural areas forms a part of a contiguous conservation area from Jigme Singye Wangchuck National Park and the Indian Manas National Park in the south that is among the largest in South Asia and is characterised by wide range of vegetation and wildlife habitats including rare and endangered species.


Situated at the cultural heartland of the Central Bhutan, Zhemgang Dzongkhag is bounded by four other Dzongkhags of Bumthang, Trongsa, Monggar, Samdrup Jongkhar and Sarpang. The Dzongkhag is spread over 67 villages approximately covering 2,411 square kilometres of land area.


Rising from an altitude of 100 metres in the plains bordering the Indian town of Assam to 4500 metres in the north, Zhemgang is known for its topographical and climatic extremes. A common feature of its topography is the mountain ranges with steep slopes, deep gorges and narrow valleys with three main rivers flowing through. Mangde Chu, Dangme Chu, and Chamkhar Chu are main rivers that meander through the Dzongkhag before finally merging to form the Manas.


The Dzongkhag falls in the three protected areas in the country with the Royal Manas National Park in the south, the Jigme Singye Wangchuck National Park and the Thrumshingla National Parks in  the north.


The climatic conditions are highly influenced by the extremely variable nature of the terrain. The climate is highly humid in the lower elevation and in the valleys covered by dense forests and extremely cold in the high altitude. Rainfall is heavy with annual rainfall varying from 1000mm to 5000 mm , peaking in the months of July and August.


Vegetation varies greatly and the luxury in vegetation is distinguished by broad leaf trees, plentiful climbers, abundance of cane and bamboo and orchids. Forests are an important wealth that has helped these people in developing a wide range of basketry for their household needs and for additional sustenance.

The animal kingdom is also interesting. All sorts of animals from Elephants to the Golden Langour and twenty two endangered species are found in the jungles. Ave fauna of Zhemgang is also rich and varied. A wide variety of birds have their home in these jungles.


Agriculture and animal husbandry are the main sources of livelihood for about 90% the population. They cultivate not only on wet and dry lands but Tsheri or Shifting Cultivation is a dominant agricultural practice. With rapid economic development programmes in place, farming has undergonr drastic changes. A good and reliable network of irrigation channels has facilitated the use of modern agriculture tools and specialized farming. For the people of lower Kheng, the Panbang road network that links with the Assam town of Mathangguri has further enhanced cash crop production and establishment of various Associations and farmers groups.

Posted by Unknown at 6:38 PM No comments: